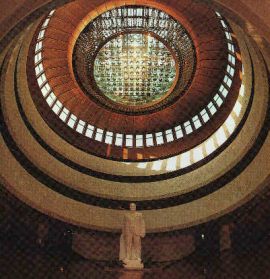 Russia’s bourgeois-democratic revolution of February 1917 dethroned the dynasty of the Romanovs who had ruled the country for over 300 years. A Provisional Government was formed as the body of power of the
bourgeoisie.

At the same time, the Bolsheviks established Soviets of Workers’ and Soldiers’ Deputies throughout the country to represent the power of the people. As a result, a dual power ensued. A group of exhibits in the museum is devoted to the events of the February Revolution.

Under these conditions, Lenin advanced the objective of the transfer of all power to the Soviets. On March 27, 1917 he left Switzerland for Russia.

Lenin’s activity during the period when he prepared and led the Great October Socialist Revolution to its victorious outcome is traced in great detail. The exhibits, among them paintings and sculptures, show his return to Russia, and the rousing welcome he received from the workers and soldiers in Petrograd (the name of St. Petersburg after 1914).

The most important event of that time was Lenin’s report «On the Tasks of the Proletariat in the Present Revolution», which he made on April 4, 1917 to the members of the Central Committee, the City Party Committee, and the delegates to the All-Russia Conference of Soviets of Workers’ and Soldiers’ Deputies, which was then in session.

In the theses to the report, known as the April Theses, Lenin advanced a scientifically substantiated program of struggle for the victory of the proletarian revolution and the establishment of a republic of Soviets as a political form of proletarian dictatorship. The exhibits introduce the visitor to the tense atmosphere in which Lenin worked when mass demonstrations swept through the country, the Ukraine included, and the Provincial Government ordered its troops to shoot at workers and soldiers demonstrating against the war in Petrograd on July 4, 1917. The peaceful course of the revolution came to an end and the bourgeoisie introduced a reign of terror in the country.

Due to the persecution of Bolsheviks by the Provisional Government, it was dangerous for Lenin to maintain his legal status, and so by decision of the Bolshevik Party Central Committee, he went underground. Paintings, photographs and other exhibits tell about his life in a hut on the shore of Lake Razliv in Sestroretsk near Petrograd.

It was here that he wrote his book The State and Revolution (published in 1918), in which he developed Marxist teachings on the state, the theory of the dictatorship of the proletariat, and outlined its principal functions. From the underground, Lenin guided the work of the 6th Party Congress held in July—August 1917, which adopted the course of preparing for armed uprising. Despite the danger to his life, Lenin returned to Petrograd in October 1917.

Numerous material on display cover the events of the two weeks in October preceding the socialist revolution: photographs of the members of the Military Revolutionary Committee, the group which carried out the revolution, at the Petrograd Soviet; the revolutionary headquarters at Smolny Institute; photographic copies of Lenin’s resolutions on the armed uprising, which were adopted by conferences of Bolsheviks in various cities and regions of the country; and his letter to the RSDLP Central Committee written in the evening of October 24, urging that the uprising be commenced.

There is a map titled «Lenin at the Head of the Armed Uprising», a model of the cruiser Aurora, the blank shot from one of its guns gave the signal for the storming of the Winter Palace, the most important documents issued during the first days of Soviet power — the Decree on Peace and the Decree on Land, a scale model of Lenin’s study as well as models of the room Lenin and his wife Nadezhda Krupskaya lived in at Smolny.

There are also documents showing the constant and diverse assistance the Soviet government and Lenin rendered the Ukrainian people.

The documentary and pictorial material in the section on the next floor shows Lenin, founder of the socialist state and Party and state figure, between 1918 and 1924. An exact replica of a part of Lenin’s study in the Kremlin and a photo¬graph showing Lenin at work in his study acquaints the visitor with the surroundings in which he worked.

Further on, the exhibits show the first measures the young Soviet country undertook to restore its economy. A place of prominence in this group of exhibits is held by Lenin’s book The Immediate Tasks of Soviet Power (1918), which was devoted to the building of a new society and to the economic policy of the Soviet state.

Many of the materials deal with the measures the Soviet government introduced to eliminate illiteracy among the workers and peasants.